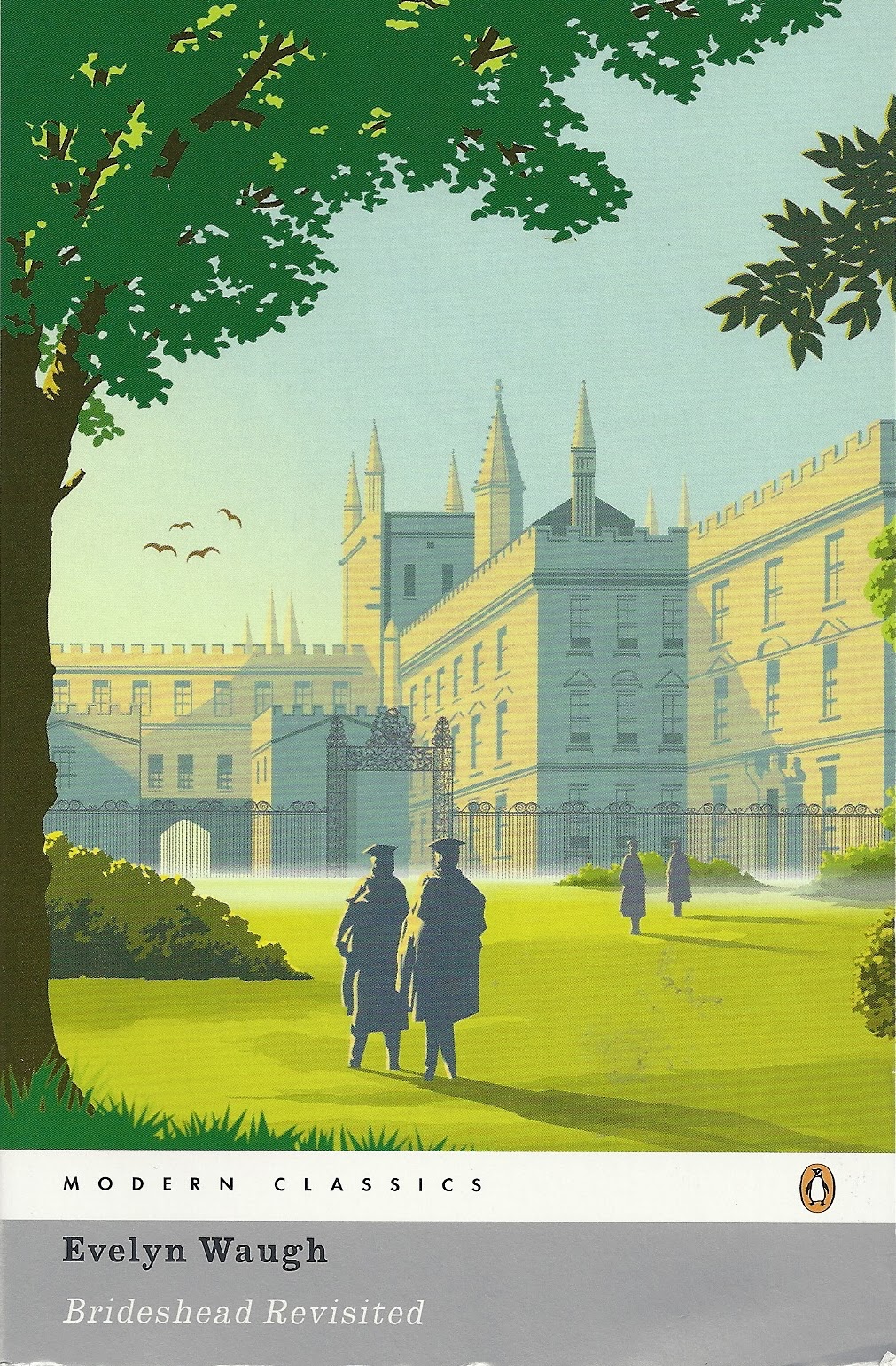 “Sometimes, I feel the past and the future pressing so hard on either side that there's no room for the present at all.”

Please forgive me if I don't put on my black-and-white evening tail coat and join the dinner party gathered in the 'Tapestry Hall' to raise a glass of vintage 1906 Montrachet wine in admiration of Evelyn Waugh's much beloved novel Brideshead Revisited. Don't get me wrong, the novel is very disappointing in many aspects (especially in regards to the weak story and banal characters) but it does still contain some substantial merit. I do not mean to come across as impertinent towards Mr. Waugh. Indeed, I would actually be glad to make a toast to his elegant writing style that can be most clever and delectable to read when he does not fall into the habit of going overboard with the flowery prose. For example, the way Waugh has the narrator Charles Ryder describe one of his sexual experiences is most ingenious: "It was as though a deed of conveyance of her narrow loins had been drawn and sealed. I was making my first entry as the freeholder of a properly I would enjoy and develop at leisure" (248). Who would have thought a blue-print construction metaphor could be both funny and titillating? Nonetheless, I cannot fully praise Evelyn Waugh's virtues as being one of the 'great novelists' of the 20th century--at least not on the basis of this particular work or Vile Bodies which I read last year and happened to enjoyed a great deal more for its brevity, biting satirical humor, snappy dialogue and twisted revelations. In contrast, Brideshead Revisited is the more ambitious novel but at 350 pages, the narrative is a tedious chore to get through that revels in superfluous detail and leaves much to be desired. Although the story deals with several important issues such as religion, class, marriage, alcoholism and most importantly the changing social structures at the beginning of the 20th century, Waugh only seems to gloss the surface. Or, perhaps his attempt at subtlety were lost on me. He is successful in wrapping up the novel with splendid irony but takes far too long to get there. Furthermore, as much as I enjoy his writing style, I can only seem to handle it in small doses before losing patience.

Divided into three sections, the novel is narrated by Charles Ryder, a middle-aged British officer who recollects on his early years as a young Oxford student where he meets the flamboyant and eccentric Sebastian Flyte--an important figure who has a major influence on his life's trajectory--and continues to reminisce all the way up until the present time when he is deployed to fight in WWII. It is worth noting that the secondary title of the novel is called "The sacred and profane memories of Charles Ryder." Once again, Waugh displays his clever use of irony, with particular emphasis on the novel's central focus: religion. Charles is sharing some of his most personal and harrowing experiences, which in effect can be perceived as sacred to him; that is to say, his memories are regarded with much nostalgia and reverence as one might bestow upon a deity. Here is a striking passage that illustrates the novel's focus on memories and sentimentalism: "I should like to bury something precious in every place where I've been happy and then, when I was old and ugly and miserable, I could come back and dig it up and remember" (26). If only Waugh could have included more profund moments such as this one to give the story a much needed boost in emotional resonance. For Charles, the past serves as a time of bliss containing youthful dalliance, drinking and wistful languor but it also serves as a painful reminder of loss. His life's story is 'profane' because Charles is a self-proclaimed agnostic and his decision to live a secular life has dire consequences, especially when it comes to love. Ironically, Waugh seems to be making the argument that love serves as a precursor to faith, religious belief system (in this case, Catholicism) and ultimately, salvation.

Despite my criticisms towards this novel, I am not giving up on Evelyn Waugh just yet. There are still plenty of other works in his oeuvre such as A Handful of Dust and Scoop which might help to redeem his stature in my eyes but he will likely take a seat on the back-burner before I get around to reading anything else by him.

This is the first novel I have read for 2014 and part of my Classics Club Challenge.
Posted by Jason C at 00:33

Email ThisBlogThis!Share to TwitterShare to FacebookShare to Pinterest
Labels: Classics