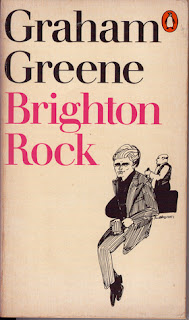 “This was hell then; it wasn't anything to worry about: it was just his own familiar room.”

Sorry, but I honestly can't remember much about this one other than it was dull, silly and my least favorite novel so far from one of my favorite authors: Graham Greene. It was one of his first novels (1938) and it seems as if he was still in the process of developing his writing style and thematic concerns as an author, which might help to explain the rough, inconsistent pulp-fiction aesthetic employed here. Nonetheless, it is interesting to note that in this novel, Greene lays out the foundation for specific subject matter and an artistic vision that will dominate the rest of his long writing career: hyper-masculinity and Catholicism.

From what I recall, the plot involves a rebellious and violent teenager named Pinkie (such a funny name) who belongs to a gang, commits a violent crime and then a prostitute becomes determined to bring him to justice. Several bizarre incidents take place and outlandish characters show up that borders on preposterous. The story begins to make very little sense, coming across as a cheesy B-film noir with a weak script and hammy acting. Surprisingly, it was even adapted several times into movies so I am curious to see how the filmmakers utilized the source material.

Similar to most of Greene's protagonists, Pinkie struggles with his faith and sense of eternal damnation. Even though he is sociopath and not deserving of any sympathy, Greene explores morality by linking it with the traditional good vs. evil theme but fails to reach the profundity found in his later works. He also attempts to provide some social commentary concerning a rebellious youth culture, although only seems to gloss the surface. Additionally, Pinkie is a likely influence on the character of Alex in "A Clockwork Orange" who also has no respect for the law and relishes in committing violent crimes. Pinkie has the potential to be a very interesting and complex character but seems to lacks depth. In fact, much of the novel seems underdeveloped and inadvertently comes across as a trifling farce. Despite being disappointing in many aspects, I believe that this novel is a stepping stone that Greene uses to later write some of his best novels. Besides, everyone has to start somewhere to master their talents in order to achieve greatness.