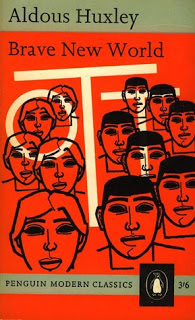 “But I don't want comfort. I want God, I want poetry, I want real danger, I want freedom, I want goodness. I want sin."

It seems like a pointless exercise to write a review on this widely popular dystopian classic that has been analyzed to the point of no return and has been required reading for most high-school students over the many decades since its publication in 1932 (unfortunately, I was not provided this luxury). Not to mention, a lot of the story details have escaped my memory but I clearly recall being fascinated by the sociological ideas presented in the novel  along with Huxley's accurate depiction of advanced technology and its negative effect on future human civilization. He was simply, ahead of his time.

Even though the novel is prone to heavy doses of pedantic discourses (especially during lengthy conversations between Mustapha Mond and the Savage) and the characters themselves are often perceived as caricatures (then again, one could argue that this is intentional since individuality has been eradicated from society) for Huxley to use irony, satire and even allegory to express his ideas, this narrative approach does not diminish the novel's power to engage the reader to think critically about a wide range of important issues that are still, if not, more relevant today than ever. Technology is moving at such a rapid pace and can be dangerous in influencing the way people think and conduct themselves; the media has become such a dominant force in most cultures and social conditioning  is becoming an all too real concept. In Huxley's futuristic society, a hallucinogenic drug named "soma" is used to control the masses and numb people into a state of complacency; they become slaves to the system. At one point, Mond explains that "unorthodoxy" is dangerous because it strikes at the heart of society itself so in order to achieve stability, individual identity must be squashed out. A scary premonition but one that is all too plausible with the influence of technology and the media. False consciousness tends to distract people from the reality of their situation. For me, the most interesting approach to the novel is from a sociological perspective. I've barely scratched the surface of this complex work--the concept of free will vs. predestination along with the contrast between Marxist and capitalist ideologies deserves a much thorough analysis.

On a side note, I was fascinated to learn that on his death bed, Aldous Huxley requested that he be given LSD to ease the pain--an ingenious idea!

Email ThisBlogThis!Share to TwitterShare to FacebookShare to Pinterest
Labels: Science-Fiction