Deal Me in Challenge: Blossom: Priestess of Oya, Goddess of Winds, Storms and Waterfall by Dionne Brand 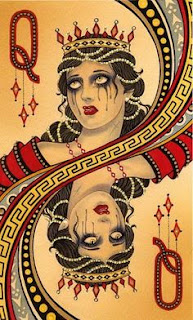 And the winner for the longest short-story title goes to...

Dionne Brand's Blossom makes for a great companion piece to Austin Clarke's Canadian Experience that I read last year for the DMI challenge. Both authors write about the immigrant experience in Canada from an Afro-centric perspective and while they each present the difficulties associated with assimilating into a dominant white culture that promotes systematic oppression, Brand is more optimistic than Clarke, playing with the supernatural in Gothic fiction to reclaim a sense of autonomy for the disenfranchised immigrant rather than victimization. Brand reinvents the "cultural other" by subverting problematic racial stereopyes; more specifically, the "black mad woman" that is a common trope found in Gothic literature, with the most popular example being Bertha from Charlotte Bronte's Jane Eyre. Madness is racialized and gendered in this novel with Bertha being the archetypal villain from the Caribbean. Insanity is prone to violence and madness does not payoff for Bertha in the end (my apologies to those who have not read this novel but to think that a crazy black woman locked up in an attic will somehow escape unscathed in a 19th century Gothic text would be naive). At the time that Bronte was writing, black people from the colonial islands were seen as cannibals or savages that practiced black magic/voodoo and was therefore one of the many reasons that justified colonialism as a way to bring Christianity to these heathens, cleansing them from evil spirits. However, in Brand's story, the 'black mad woman' motif is not represented negatively but rather as a source of agency reflected in the black immigrant experience. In fact, Brand's depiction of madness is comical and empowering, allowing a new space for cultural identity.

The protagonist, Blossom, is trying to achieve upward social mobility as an immigrant similar to George in Clarke's Canadian Experience but she too fails because of racial discrimination. However, unlike George, she has to deal with female gender barriers. As a struggling immigrant trying to make ends meet, she works in many service positions with one of them being a maid for a white employer who tries to sexually assault her. Of course, as a rich white man, he sees her as his "property" like a slave and is under the impression that there can be consequences for his actions. Wrong! You messed with the wrong black woman, dude. Blossom resists her attacker by grabbing his neck in a similar way Bertha attacks Rochester in Jane Eyre. This assault precipitates Blossom's madness that develops into an act of rebellion, bringing about real resistance to white hegemony. It is also ironic that she calls on a Christian God to ask for help. In a rather funny scene, Blossom and her friends begin protesting in front of the white man's house with picket signs, proclaiming that he is a rapist, which obviously draws a lot of attention in this rich white neighborhood. Hence, resistance through madness.

Later on, we find out that Blossom is having marital problems with a deadbeat husband and during one of their fights, she chases him down the street with a bread-knife, threatening to cut off his genitals. Once again, Brand infuses comedy within the serious subject matter,  Blossom's madness continuing to be a type of emotional and spiritual release from societal pressures. Madness is a vehicle to independence and catharsis; a way of negotiating pain. She is not a woman silenced by society like Bertha and will fight back until she eventually "blossoms" into an Obeah woman (a clever play on words by Brand), which refers to a Caribbean woman who practices black magic or sorcery. For Blossom, this spiritual transformation is redemptive and signifies a return to cultural origins; an effective strategy to survive immigration. Obeah started as an African practice that was grounded in spiritual cosmology. Just to reiterate a previous point, these foreign cultural practices were seen as forms of sorcery and witchcraft as a means to justify colonial rule (ideologically speaking). Furthermore, Obeah and other spiritual leaders were seen as a threat to colonizers since they had the power to organize revolts so it was imperative to discredit them. Since the Obeah has been negatively represented in Gothic literature, Brand attempts to reclaim it so as to no longer be associated with racist stereotypes through various inversions. For example, the holy spirit in the Pentecostal church turns into Obeah and enters Blossom where she experiences a "glorified vision." She begins speaking in tongues, influenced by the Priestess of Oya, a goddess worshipped in Nigeria associated with wind and renamed Obeah during the slave trade. Ironically, she finds spiritual transcendence in a Christian paradigm. This is a place of light, hope and harmony, not evil as usually depicted in the Gothic tradition. Not only is she able to bring the black community together with her newfound powers but this cultural reclaimation in Blossom gives her further agency. The pain she experiences as a black female immigrant is ultimately redemptive, using black magic to heal and protect others. Her panoramic transcendent vision puts her in direct contact with the marginalized black community and she begins to understand the history of black suffering.

One of the most striking aspects of this story is the Brand's use of language that reflects a West Indies patois and vernacular. The improper use of syntax and grammatical errors, especially with pronouns, are deliberate; a way for Brand to subvert English conventions of language and reclaim a cultural way of speaking. In essence, Blossom is able to write her own narrative without outside influence from the white hegemonic culture. As a poet, Brand delivers a unique form of storytelling that often blurs the line between poetry and prose without compromising the narrative or its thematic concerns. An excellent read.