I couldn't ask for a better way to reboot my blog than to participate in this wonderful event held by Stuck in a Book. It has been over six months since my last post and now that the school year is over, I can actually have a life again and start the reading frenzy all over again! I look forward to challenging myself even more this time and hope that some of you stick around to follow my journey to expand my literary knowledge and improve upon my writing skills. Ok, let's the show on the road!

In no particular order, here is a list of the Muriel Spark novels at my disposal that I plan on reading for the event:
I cannot seem to make up my mind as to which novel to read first so it will likely be random. Concerning The Driver's Seat, I was actually in the process of writing an in depth review almost a year ago but never got around to finishing it and my memory is rather hazy so hopefully I can redeem myself this time around. As you can see, I started a bit early and finished Not to Disturb although had no idea about this event until after the fact.
Posted by Jason C. at 22:17 2 comments: 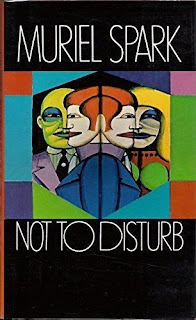