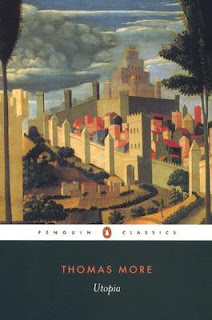 “A pretty face may be enough to catch a man, but it takes character and good nature to hold him."

It would seem that many authors of the science-fiction genre who write about dystopian or utopian societies owe a tremendous debt to Thomas More. Considered to be the first fully fledged work during the renaissance, Utopia has been highly controversial since its publication that can be interpreted from a wide variety of perspectives (political, economical,sociological, philosophical) and still remains a dangerous text for social reform. It would not surprise me that this text was likely influential for Karl Marx--the narrator Ralphael identifies private property as the central cause of social problems. However, one of the many questions the reader must acknowledge is whether More is to be taken seriously in his depiction of an "Ideal Commonwealth" or if it is only a satire. Personally, I think that it is important to read the text as a "literary work" that is a satire on More's own culture--an imaginative response to Plato's Republic where its central ideas are built on the foundation of paradox. He adopts this particular mode "to play seriously" or another way to put it, he delivers a joke that has serious intentions. After all, Utopia is Latin for "no place." Perhaps this was his cunning strategy to avoid execution since it directly challenges the long traditions of monastic sovereignty.

A little background information on Thomas More and historical context will perhaps help to illuminate some of the ideas explored in the text. He was born in 1478, the son of a lawyer and an Erasmus humanist thinker, influenced by the Latin theologian Desiderius Erasmus. His friendship with Erasmus is important because one can make the argument that he is portrayed as the allegorical figure of Raphael, who relates the story of his journey to a utopian society to the narrator. In a nutshell, Erasmus believed that the essence of Christianity is the philosophy of peace, he was highly critical of war and held reason as the divine spark within man that would allow humanity to prosper. Without the power of reason, humanity was bound to destroy itself through conflict and war. He also suggested that greed and pride are negative agents that lead to the abandonment of reason since it involves trying to grasp things that go beyond human understanding. He viewed creation as a  hierarchical structure (God at the top and then in descending order: angels, man, animals and at the bottom is chaos) where man is born helpless but most importantly, man is unique among god's creatures and born to live in peace by his physical nature because he possesses reason.

Getting back to Thomas More, he is deeply religious but conflicted with the split between the contemplative and active life (similar to Erasmus). He spends two years in a monastery but soon afterwards becomes a popular member of court. In 1518, he becomes one of King Henry VIII's most important advisers. Remember now, he is living during the protestant reformation, which is a very dangerous time period because of the heated conflict concerning religion that is spreading across England through Martin Luther's attacks on the Catholic faith. So, what does all of this have to do with the text? Well, for starters, all of these humanist ideas are advocated by this Utopian society and Ralphael often comes to stand for and against More. For example, he defends contemporary European philosophy, which More opposes.

The text is framed by a series of letters where truth and fiction become entangled in a complicated, antithetical relationship. Book 1 consists of a dialogue and engages in learned discussions. For instance, the responsibilities of intellectuals is a topic of interest: should a learned man be subject to a Prince? There is also a debate on the question of "punishment" where Ralphael believes there is a place for philosophy within the courtship of the king. In essence, Book 1 contains expanded rhetorical examples while Book 2 is an example of the problems. The use of satire complicates the reader's relationship to the narrator. The question of satirical distance must be taken into account; there exists shifting patterns of proximity between what Ralphael says and how the reader is intended to interpret it. There is no real vantage point for the reader.

The Utopians obviously live in a different type of society than England especially when it comes to private property but the big question remains: is Utopia an ideal society? It protects and fully provides for its people but at the cost of personal freedom and individuality. Thomas More is purposefully ambiguous here and leaves it up to the reader to form their own conclusions. This is not an entertaining read by any means but still remains an important historical literary work that should appeal to those with some interest in early British literature or for those hardcore Marxists out there.