Deal Me In Challenge: Souls Belated by Edith Wharton 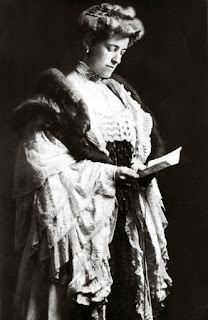 So much for my triumphant return in May only to make an appearance 5 months later...

To those few individuals who actually follow my blog, I offer my sincere apologies. It was never my intention to go completely AWOL but I am back for now and that is what counts, right?  Whether or not I will be able to provide new material on a regular basis is anyone's guess. Nonetheless, I figured the best way to ease back into writing reviews would be start off small to reignite my passionate enthusiasm towards literature and gradually build up momentum towards more extensive reviews. The Deal Me in Challenge is a great way to get started again. There still remains a little over two months to finish reading 52 short-stories for the year and I am determined to complete this challenge!

Let me preface this review by saying that Edith Wharton is one of those highly-acclaimed authors whose writing never appealed to me in the least with a reputation that seemed completely undeserving of merit. In fact, prior to reading Souls Belated, I was quite certain that Wharton, along with her pal Henry James, might just be the two most overrated American writers during this particular time period. Despite its short length, reading Ethan Frome remains one of the most dull and painful reading experiences in recent memory. Both House of Mirth and Age of Innocence produced similar feelings of distaste and extreme boredom, which compelled me toss them aside after the first few chapters without any remorse. Suffice it to say, I approached Wharton with much trepidation, expecting to be  disappointed once more. Consider my surprise then to discover a wonderfully complex and emotionally compelling short-story that made me question my previous assessment of Wharton altogether. I will not go so far as to proclaim a complete change of heart but my resentment towards her as a writer has certainly subsided. I might even consider tackling one of her famous novels again sometime down the road.

Similar to the many works of Henry James, Wharton adopts an "international theme" and sets her story in Europe rather than America. Lydia and Gannet are an American couple traveling abroad from Milan and elsewhere, all the way to France. When we first meet them on the train to Paris, an undeniable tension is brewing, ready to explode at any possible moment. They find themselves caught between their own sense of morality and the pressures of societal norms--factors which begin to cause a great strain on their relationship. What makes this story fascinating is not so much the actual story but the rich underlying subtext and emotional resonance that reaches its highest point during the climax. Wharton shows complete control of tone, influencing reader response through shifting focalization and ambiguity. The ending is purposefully left open to interpretation, carefully constructed with such vivid and meticulous descriptions that is nothing short of stunning. Rarely have I come across an author who uses the ellipsis in such a lyrical and profound way.

Wharton utilizes subtle nuances, symbolism, foreshadowing and ambiguity to emphasize some of the story's larger thematic concerns. She is critical of marriage as an institution--subverting many conventions associated with the"marriage plot" and is keen to highlight the superficiality of the upper classes. Gender politics, sexuality, male hegemony, paralysis vs. consciousness and hypocrisy are also worth paying attention to in the text. Even as a harsh social critique bound up in heavy drama, spots of ironic humor shine through Wharton's comedy of manners. The title of the story is important as well and loaded with multiple meanings associated with "souls": lost souls, spiritual souls, personal souls, soul mates, death. The standard definition of "belated" referring to lateness or delay of some sort, makes sense within the context of the relationship between Lydia and Gannet. Additionally, the word can also mean "archaic" or "old-fashioned" that further emphasizes Wharton's total disregard for traditional values and norms, which no longer have a place in the so-called "modern world." I may not be completely sold on Wharton yet but this is an excellent short story that contains a great deal of complexity and cleverly defies expectations. Highly recommended.