Deal Me In Challenge: The Garden of Forking Paths by Jorge Luis Borges 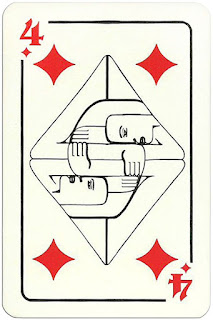 Borges' stories are always highly self-reflexive and consistently reveal their own narrativity. "The Garden of Forking Paths" is no exception. The structuring of a detective story within a labyrinth framework produces a chiasmus effect, different narrative levels folding on themselves in an array of paradoxical reversals. Suffice it to say, this is one confusing story. It begins with the description from a history textbook about a strategic attack by the Germans against the British during WWI, accompanied with a statement written by a Dr. Yu Tsun to corroborate the historical facts. However, it is also revealed by the third-person narrator that the two first pages are missing from Tsun's personal document. Confused yet? Narrative gaps, fragmentation and lacuna are some of Borges' favorite literary motifs to employ in his stories to generate a sense of confounded mystery. He then drops various clues and riddles along the way for the reader to solve. For example, take this little nugget:

"He who is to perform a horrendous act should imagine to himself that it is already done, should impose upon himself a future as irrevocable as the past."

On the surface, this statement seems like harmless philosophical musing but nothing in a Borges story is by accident. Once the proper context has been established, the reader can go back and realize that the author has been alluding to time as a paradoxical bifurcation, projecting unrealized versions of events. The ideological fallibility of free-will and the self-reflexive 'authorial voice' will also be featured prominently in the story.

Beginning in medias res because of the missing pages, Dr. Yu Tsun's first-person narration makes up the bulk of the story. He is a Chinese-German spy in England and suspected of murder by authorities, led by a Capt. Richard Madden. He claims to have been forced into espionage even though the Germans are racist towards the Chinese and is driven by a sense of pride, wanting to prove that "yellow man could save his armies." Weird depictions of Orientalism aside, he is caught in a deadly game of cat and mouse, desperate to place important military information into the right hands before getting caught. This brings us to the next frame narrative: Dr. Stephen Albert, a renowned sinologist (someone who studies China) who is sought out by Dr. Yu Tsun for reasons that are bewildering at first but made clear by the story's end. Coincidentally (or not?), Dr. Stephen Albert is a leading expert on the works of Tsui Pen who also happens to be Dr. Yu Tsun's grandfather. He was famous for an obscure novel and constructing a "labyrinth in which all men would lose their way." Pen was murdered, leaving behind an indecipherable novel and the actual labyrinth was never found. I will not reveal what happens next, only to say that it is totally mind-blowing.

This story is an elaborate puzzle or to put it another way: a literal and figurative labyrinth full of unexpected twists and turns, contradictions and paradoxes. A metaphysical concept of time becomes integral to understanding Borges' paradoxical narrative construction containing an infinite web of possibilities occurring simultaneously. Borges' convoluted narrative and circumlocutions might initially seem like they serve no discernible purpose but the creative way all of the different narrative threads interconnect and come full circle in the end is nothing short of genius.