A Farewell to Arms by Ernest Hemmingway 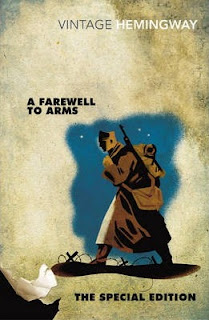 “I’m not brave any more darling. I’m all broken. They’ve broken me.”

Perhaps upon further reflection my rating will go up but as it stands right now, this novel was frustrating in every conceivable way. Hemingway's sluggish narrative often put me to sleep. Nor did the flat characters and dull story improve matters. Here's my question: Is the author's detached, stoic and sparse writing style deliberate and if so, what purpose does it serve? I'm not exactly sure but it seems to be me that Hemingway wanted to strip down language to its bare essentials; revealing very little emotion to show humanity in its rawest form, an experimentation in minimalism. He succeeds admirably but this does not make for an enjoyable reading experience, at least not for me.

I really think Hemingway could have benefited with a better editing job. The novel is way longer than it needs to be and if one were to take out all of the pointless scenes and tedious passages that amount to nothing substantial, this might have actually turned out to be a a great novel. The dialogue is probably one of the more striking aspects of Hemingway's literary technique: fast-paced, pithy and terse but far too self-aware, making it difficult to take the characters and story seriously.

Hemingway served in WWI and the trauma he encountered on the battlefield haunted him for his entire life. War and masculinity are two subjects that he will return to over and over again throughout his literary career. A Farewell to Arms feels very Hemingwayesque in that regard. The story revolves around a solider who volunteers to join the army when war breaks out and while overseas he falls in love with a nurse. Their relationship can be described as anything but passionate and Hemingway does such a poor job with these characters. They never come across as fully realized--just vapid empty shells, stilted and lifeless. His chauvinistic machismo is off-putting and the treatment of women is downright offensive. Was he being intentionally misogynistic or does he just fail at writing convincing female characters who are overly submissive to the point of parody? I really don't know.

This seems to be one of those love it or hate it kind of novels with no middle ground. It's clear which side of the fence I sit on. Nevertheless, I'm not going to give up on Hemingway just yet and have thoroughly enjoyed a few of his short stories so there is still a chance he can redeem himself in my eyes.