The Prime of Miss Jean Brodie by Muriel Spark 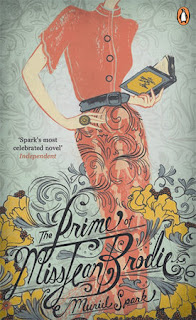 "Allow me, in conclusion, to congratulate you warmly upon your sexual intercourse, as well as your singing."

Clever. That is the one word that I would use to best describe the writing of Muriel Spark. The Prime of Miss Jean Brodie is a wickedly clever little novel that took me by a complete surprise and marks my first exposure to Muriel Spark, an author who up until now, remained unknown to me. I never would have thought a story revolving around a female Scottish teacher and her students during the 1930's would interest me at all but Spark really captured my attention with her irreverent style and dark humor. She is unconventional when it comes to narrative form, undermining the reader's expectation at every turn. For instance, the big revelation, which would usually occur at the climax of a novel, is presented here to the reader at the very beginning. Next, she weaves together the past, present and future simultaneously; presenting an intricate narrative that walks a fine line between satire and seriousness. The way she plays around with time, memory and perspective is ingenious, providing the narrative with a rich complexity. However, she isn't a experimental prose stylist in the modernist sense; on the contrary, her writing is crisp, direct and razor sharp. Muriel Spark reminds me of a female version of Evelyn Waugh without the haughtiness, racism or blatant misogyny.

Spark's witty and economical prose is a pure joy to read. She has a great ear for dialogue and her writing is entertaining as much as it intellectually stimulating. She uses irony with such deft precision, evoking a caustic sense of humor that is funny as much as it is unexpectedly poignant. A strong social commentary also lingers in the background but the feminist and anti-establishment leanings are not heavy handed; rather, the social, political and religious commentary is subtly layered which makes story more powerful and emotionally resonant. Miss Jean Brodie is a fascinating and vivid character that is not easy to forget. She is both mesmerizing and terrifying to behold. The novel was even adapted into a film starring a young Maggie Smith that I really need to watch soon.