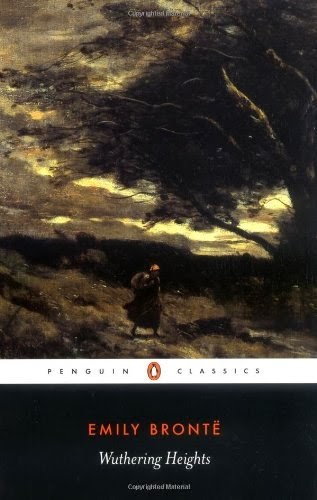 "If all else perished, and he remained, I should still continue to be; and if all else remained, and he were annihilated, the universe would turn to a mighty stranger."


Well, that was a total waste of time. Why do I keep forcing myself to read such drivel when there are so many other great pieces of literature to discover? Alas, I do seem to possess certain masochistic tendencies, often going through the grueling process of self-inflicted torture just to reach the end of a novel but these unpleasant reading experiences are worthless undertakings bordering on near delusion as a form of self-aggrandizement. Reading should be an enjoyable and rewarding experience without mental suffering akin to shock-therapy. Much to my frustration (mostly at myself for the lack of willpower to just toss the book aside, although plenty of vitriolic criticism is reserved for the author as well), the only accomplishment obtained here is the fact that I can now claim to have finally read Wuthering Heights by Emily Bronte, which is not exactly a noteworthy feat by any means. Besides, who really cares anyways if I have read a highly praised classic novel written in the 1840s? Did I gain any valuable insight from it or will I now be a better person for having done so? No.  However, one, if not the only positive aspect is the realization of how foolish and irrational I have been on my journey to re-discover the classics. From this moment on, I vow to stay true to myself and not give in to the ridiculous notion that it is imperative to finish a novel just for the sake of completion, either to please others or to comply with the general consensus. Seriously, life is too short for such futile endeavors.

Sorry for that little rant, now we can proceed to the review. There is no surprise as to where my opinion stands concerning this novel. It is baffling to me how so many people praise Wuthering Heights as an alleged “masterpiece" of the English literary cannon and one of the greatest doomed love affairs between Catherine Earnshaw and Heathcliff ever written. Even if you have never read the novel or know anything about it, you have likely heard of this title or the names of these two famous characters, since the novel has achieved a type of iconic literary status. If I am to be considered a philistine for failing to recognize its “genius” or to be the least bit deserving of such fervent commendations, so be it. I have no reservations for denouncing this novel’s reputation, which as far as I can tell, has been championed largely by those who feel it prudent to jump on the literary band-wagon. Or maybe people seem to find something romantic about the relationship between Catherine and Heathcliff. She’s a snobby, selfish, temperamental upper-class brat and he’s a brooding, diabolical sociopath of pure evil who is hell-bent on seeking revenge against her for marrying someone else instead of him. A match made in heaven.

This is not a love story folks. As a psychologically case study, Heathcliff makes an interesting subject for analysis. Adopted by Catherine’s father from undisclosed circumstances, he is treated horribly by Catherine and her brother, prone to incessant teasing and ridicule for being an outsider. All of these negative influences eventually turn him into a spiteful and malevolent villain. At first, it is easy to sympathize with the young Heathcliff since he is a victim of an abusive household. He runs away from the estate in distress after Catherine goes on to marry some dude named Edgar Linton, only to return a couple of years later as a wealthy man (the source of his fortune left ambiguous) but by then, he has transformed into an unsympathetic scoundrel. During his absence, he knocks up Edgar’s sister who gives birth to a son, but the boy suffers from poor health. Unable to stand his cold and unloving disposition, she leaves him, taking the child with her. Even after Catherine dies (sorry for the spoiler but it happens fairly early on in the novel, although her death should have occurred sooner—good riddance!) he still harbors resentment against her for slighting his affections all those years ago. Determined to achieve complete retribution, he patiently waits for her brother to die in order to gain control of the estate. However, Catherine leaves behind a daughter, who is also named Catherine but as a female, she cannot inherit lands and titles. Heathcliff is also unable receive the inheritance because he is not blood relation. Haunted by the past and unable to let go of his love for Catherine, he is driven to madness. He returns to Wuthering Heights with a devious plan to influence an impending marriage between Linton and Catherine Jr. Heathcliff despises his son, cares nothing for his well-being and only wants to use him in his malicious scheme. Knowing full well that Linton is sickly and all he has to do is wait for his early demise so that the inheritance will finally be transferred to him. Also, having Catherine Jr. as a daughter-in-law, places her in close proximity to him (her father being quite adamant to keep her away from Thrushcross Grange, Heathcliff’s place of residence). This living arrangement allows Heathcliff to treat Catherine Jr. as a prisoner, providing the opportunity to use her as a pin-cushion for all of her mother’s wrongdoings. This Heathcliff fellow sure is one classy act. I skipped over many extraneous plot details and will not spoil the ending but as a novel from the late Gothic romanticism movement, prepare to be disappointed if you are expecting sunshine and rainbows. The atmosphere of the entire novel is drenched in gloom and despair.

It is important to mention that Emily Bronte utilizes a frame narrative, in which the story unfolds. One of the tenants living on the land named Mr. Lockwood and the housekeeper Nelly Dean are the two narrative voices that interpret the action, the latter providing the most dominant perspective. The novel begins with Mr. Lockwood meeting Heathcliff who forms a strange fixation on him and becomes curious to know more about his mysterious landlord. As luck would have it, his current housemaid, Nelly Dean, has also served in the region for many years and has been employed by the Earnshaw family where she raised Heathcliff as a young boy. Poor Nelly Dean! She definitely earns my sympathy for the endless amount of torment she goes through while serving two generations of the terrible Earnshaw family only to be sent off later to work for Mr. Heathcliff. Nelly Dean has the potential to be an interesting character as well as providing the novel with some much needed complexity but she only serves as an objective observer who never gets herself directly involved in any of the craziness going on around her. Just once, I would have liked to see her stand up to Mr. Heathcliff or slap Catherine Sr. and Catherine Jr. upside the head for being insolent rather than standing idly by on the sidelines. There are times when she voices an opinion or disapproval but fails to actually take any action of immediate consequence. Then again, one must take into consideration that the story takes place in the late 1700’s up until the early 1800’s, a time when English social hierarchy and decorum is strongly advocated. It would be considered highly unethical for servants to meddle in the personal lives of their employers. Anyways, she begins to tell Lockwood her side of the story but she also interprets other people’s stories, which is subsequently relayed back to Mr. Lockwood, who then filters this information to the reader. This narrative technique is all a little confusing at first but easy enough to follow once the story progresses and serves two main purposes—establishing Nelly Dean as an unreliable narrator and blurring the truth. An ominous or haunting mystery is one of many genre tropes associated with gothic romanticism. Heathcliff is a terrifying villain because the reader’s only comprehension of his character is presented in fragments, his true persona shrouded in uncertainties. Although his motives seem clear, he often acts unruly or increasingly temperamental; he is prone to violent outburst and fits of hysteria—almost as if possessed by demons (although, one can make the argument that he is in fact haunted by Catherine’s ghost, which accounts for his disturbed psychosis). At one point, he displays a creepy sense of necrophilia and even confesses to Nelly Dean of trying to dig up Catherine’s grave after she has been dead for 18 years during an episode of madness: “Being alone, and conscious two yards of loose earth was the sole barrier between us, I said to myself—I’ll have her in my arms again! If she be cold, I’ll think it is the north wind that chills me; and if she be motionless, it is sleep’ ” (210). Not exactly the ravings of a sane person. He is still so in love with Catherine that even if he was able to hold her corpse, it would feel as if she were only sleeping. Dude has issues.

Wuthering Heights is a horror story but not in the traditional sense. Emily Bronte seems to be playing around with the genre, subverting various conventions to establish her own anti-gothic romance based less on the supernatural and more on the harmful psychological effects of unrequited love. Unfortunately, Emily Bronte fails to deliver anything that remotely resembles genuine human compassion and the narrative distance created between the speaker and the reader diminishes any emotional connection to the characters whatsoever. Furthermore, the prose is incessantly dull and tedious with a story that quickly becomes absolutely ridiculous in its absurdities. Let’s just say that I was rolling my eyes in utter disbelief during every page. As I mentioned earlier, I will not be making the same mistake again by forcing myself to read a novel that produces nothing but vexation and contempt. 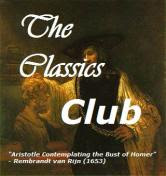 This novel is part of my Classics Club Challenge.
Posted by Jason C at 22:29