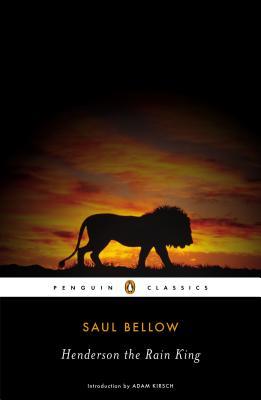 “We are funny creatures. We don't see the stars as they are, so why do we love them? They are not small gold objects, but endless fire.”

Why have you forsaken me Saul Bellow? There was a time not too long ago when I had no reservations in acknowledging him as one of the greatest writers of the 20th century but after the disappointing Mr. Sammler's Planet and now the even worse Henderson the Rain King, I may have to retract my initial position. Herzog still remains one of my favorite novels and there is no doubt in my eyes that it is a masterpiece. However, this now places an exorbitant amount of pressure on The Adventures of Augie March (the last of his 'big important works' that I have yet to finish) to exceed its already high expectations in order to persuade me otherwise that he does indeed, deserve to be recognized as one of the literary giants in modern fiction. Of course, there is still a chance that some of the minor novels written near the end of Bellow's career might prove worthy of esteem, although I can't help but remain skeptical of their merit. After slogging through the dull and insufferable Henderson the Rain King it will be a while before I am capable of mustering up the enthusiasm to read anything else by him. Out of the six novels that I have read by Mr. Bellow, this one ranks as the worst: a total abomination in which the critical acclaim it has received is most baffling. If I wasn't already familiar with his works and determined to complete my Saul Bellow Project, I would have tossed this novel aside after the first few pages.

I think the only way to read this novel and perhaps find some minuscule redeeming quality is to view it as a satire of the white-man colonial narrative, more specifically, Joseph Conrad's Heart of Darkness. Other than the setting of Africa as the main back-drop for the story, both novels could not be more different in their depiction of imperialism and exploration of human psychology. While Kurtz suffers from a certain type of madness ("the horror, the horror!"), Bellow is keen to parody this internal suffering in his larger-than-life character of Henderson, who continually repeats "I want! I want! I want!" in his mind. My interpretation of Kurtz's madness is inexplicably linked to imperialism--the ruthless destruction to a third world culture by unwarranted colonial rule. In contrast, Henderson's mental breakdown is caused by a vile capitalist society where money and greed has corrupted the human soul. Ironically, Henderson is a millionaire and believes that the only way to deal his mid-life crisis is to leave his old life behind, travel to the mysterious land of Africa to seek answers, spiritual fulfillment and perhaps find peace at last. As befitting a satire, the premise is ridiculous and excessively over-the-top but Bellow wants to have it both ways. Unfortunately, he is unsuccessful in finding a stable middle ground between satire and seriousness so the novel becomes a wandering mess of contradictions.

Henderson is not supposed to be perceived as a sympathetic character. He is a violent brute, an alcoholic, a blundering oaf, a pompous and misogynistic ego-maniac who is driven only by his self-interests. Bellow is often accused of his negative presentment of women in his novels (treated mostly as simple-minded 'sex objects') and while his sense of male chauvinism never struck me as particular unsavory before, I can totally understand the criticism after reading this novel. For example, one of Henderson's wives is punched in the face by an ex-husband and decides that it wouldn't be proper to file for divorce since she would rather prefer the physical abuse rather than having sex with him. Henderson himself is no better: he is a womanizer, a callous licentious man who uses women to satiate his own sexual appetite. Even though he treats them like pieces of meat, they still pine over him. The ultimate male heterosexual fantasy. Henderson is a pig farmer back home but comes to resemble one as well in a figurative sense through his ill-treatment of women. Once he travels to Africa, the metaphorical transformation from a pig into the lion is supposed to have powerful implications but Bellow gave me no reason to care about the plight of his protagonist. No matter what continent Henderson is on, he's still a narcissistic asshole.

Another problem with this novel is Bellow's depiction of the African 'savages' which is racially insensitive and distasteful. He plays on racial stereotypes that are downright discriminatory. While Henderson's assimilation into a foreign culture is supposed to be humorous, it wasn't the least bit funny and comes across as offensive. Bellow tries to be ironic by parodying Henderson as the well-to-do white man of the Western world who will bring modernity and order to an uncivilized people only to have him mess up constantly and actually be the one who achieves enlightenment from the local natives. On some level, the satire works but Bellow's smug arrogance in thinking that he is being insightful by cramming incessant philosophical ideas and "life lessons" down the readers throat gets annoying fast. I usually find his captivating use of language and discursive musings quite fascinating but not here. Instead, the prose lacks his usual stylistic vigor and is a tedious affair to get through. Nevertheless, there does exist several great passages like this but they are far and in between: "Of course, in an age of madness, to expect to be untouched by madness  is a form of madness. But the pursuit of sanity can be a form of madness too" (25). The use of irony is quite effective here.

Reading this abhorrent novel that masquerades as being profound brought to mind another similar work that manages to take the "white-man goes to Africa" narrative and do it so much better: A Burnt out Case by Graham Greene. This is an underrated little gem--an intelligently written story containing a sympathetic protagonist along with well-rounded supporting characters that deals with various aspects of imperialism in an insightful manner without sacrificing the narrative flow with rambling, excessive discourse as Bellow is prone to do. Greene is such a wonderful story-teller whereas Bellow seems to struggle in this area of writing; his plots meander, fall flat, often dissolving into the ludicrous. Graham Greene was a world-traveler who spent many years living in Africa. Thus, his novel contains a level of rich detail and authenticity not found in Bellow's work. Henderson the Rain King is written by someone who has never been to Africa with a narrow-minded, commonplace and mystical view of the dark continent that is laughably erroneous. In essence, A Burnt Out Case  succeeds on every level where Bellow's novel fails. Read that one instead.

This novel is part of my Saul Bellow Project.
Posted by Jason C. at 15:27