Deal Me in Challenge: Super-Frog Saves Tokyo by Haruki Murakami 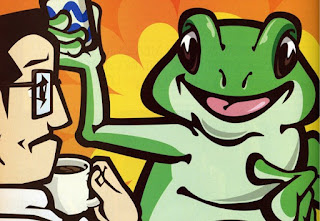 This is a weird one. With a title like Super-Frog Saves Tokyo, this should come as no surprise. Yet, the story is not just weird for weirds sake; indeed, there is plenty going on beneath the surface as the author dabbles in magical realism: blurring the lines between dreams and reality; juxtaposing the fantastic and the mundane; illustrating the negative implications of disillusionment; the abstract taking precedence over empiricism as the author's primary epistemological argument. Perhaps if I were more familiar with Japanese culture, this story might make a little more sense by having the metaphorical conceit contextualized but the appeal of this story is not in discovering all the answers; but rather, relishing in Murakami's hypnotic surrealism that takes on the qualities of a twisted nightmare. He is purposefully ambiguous to emphasize the hallucinogenic elements of his dream-world that makes for a truly delectable, albeit bizarre read. Or maybe I am reading too much into it and the story is simply about a banker who encounters a giant frog in his apartment, urging him on to help defeat a giant worm burrowed underneath Tokyo that will soon devastate the city with a powerful earthquake. Such an interpretation is specious at best. Murakami comes across as a very intelligent writer, subtlety hinting at some kind of allegory at work here but leaves the story widely open to interpretation.

Haruki Murakami is one of those authors that I have placed on the back-burner after being frustrated with some of his other works; more specifically, The Wind-Up Bird Chronicle. I couldn't even get past the first 50 pages before tossing it aside in utter exasperation. Despite my limited exposure to his work, his style does tend to be rather fragmented, long-winded, repetitive and often inscrutable but the short-story seems to suit his aesthetic far more effectively than the novel form does. Instead of a sprawling narrative that seems to meander interminably without any real purpose, the far more condensed and self-contained short-story keeps Murakami in line, a restraint from his typical excessive self-indulgence. In the author's defense, many will argue that his rambling and discursive prose is best suited to his unique brand of magical realism. Personally, I just prefer his writing in smaller doses.

Haruki Murakami my not be the most consistent of writers in terms of narrative and character development but he more than makes up for it with an inimitable creative inventiveness along with the ability to generate such intense feelings of emotion and pathos. The protagonist's sense of self-worth is surprisingly poignant:
"I'm an absolutely ordinary guy. Less than ordinary. I'm going bald, I'm getting a potbelly. I turned forty last month. My feet are flat. The doctor told me recently that I have diabetic tendencies. It's been three months or more since I last slept with a woman--and I had to pay for it. I do get some recognition within the division for my ability to collect on loans, but no real respect. I don't have a single person who likes me, either at work in my private life. I don't know how to talk to people, and I'm bad with strangers, so I never make friends. I have no athletic ability, I'm tone-deaf, short, phimotic, nearsighted--and astigmatic. I live a horrible life. All I do is eat, sleep and shit. I don't know why I'm even living. Why should a person like me have to be the one to save Tokyo?"

What a remarkable piece of writing. Rarely have I come across self-deprecation this funny and profound. Murakami is keen to emphasize the ordinary vs. the extraordinary in this particular story; often suggesting that regular people can accomplish the truly remarkable if they possess the proper mind-set. During one of their conversations, Mr. Frog goes on tell the banker about where the real fight in our lives takes place:

"The whole terrible fight occurred in the area of imagination. That is the precise location of our battlefield. It is there that we experience our victories and defeats."

The power of the imagination is a recurring theme here. The clash between conscious and unconscious thought--bridging the gap between fantasy and reality. From a Freudian perspective, the story follows the battle between the ego and the superego. Additionally, dreams become wish-fulfillment: the protagonist wants to transform his commonplace existence into a life worth living but in order to do that, he must face his fears that may, in fact, lay dormant in his subconscious.

Haruki Murakami also seems to share many similar ideas with Philip K. Dick pertaining to the mysterious nature of reality:

"What you see with your eyes is not necessarily real. My enemy is, among other things, the me inside me. Inside me is the un-me."

I absolutely love this line, especially in relation to Murakami's ideas of the imagination. Reality is elusive and cannot always be relied upon to represent the truth. In effect, the "un-me" can represent the darker aspects of humanity, those destructive unconscious feelings that can influence one's identity and moral/immoral actions.

My first encounter with this story left me completely discombobulated. It was not until a second reading that I was able to appreciate Murakami's ingenuity and virtuoso techniques. The reading experience was a lot more rewarding this time around because my attentions were more focused on the themes and ideas instead of solely attempting to wrap my head around the wacky story. It seems my earlier judgments towards Murakami were misconstrued and I am eager to check out more of his work.