I'd like to take this opportunity to make a confession: I finally caved in and bought myself an E-Reader: a Kindle to be precise. This might not seem particularly shocking but I do feel like a hypocrite of sorts considering my staunch opposition over the last few years. Not that I ever had a vendetta against Kindles or Kobos or whatever type of e-readers are available on the market but rather, my aversion was mostly personal: making the transition felt immoral in some way. Not to mention, replacing physical books with digital copies seemed like a profane slap in the face to our long held literary traditions. I'm sure that our ancestors who used to tell stories through oration or on the drawings of rocks felt a similar way when parchment was introduced. I am sure others would agree that there is something special about holding an actual book in your hands, the intoxicating smell of an old book, being able to flip back and forth through the pages. Ever since Gutenberg's printing press, books have always been printed but now with technology, this literary tradition seems like it will soon become archaic like ancient Egyptian hieroglyphics. A scary thought, indeed. I won't bother going into a lengthy debate about the pros and cons of E-Readers since enough energy has already been expended on the subject; however, I will say this: despite my adoration for the Kindle, I will not stop buying or reading printed books. It's going to take a whole lot more than being able to store 1000's of books in a small device and reading a screen to get rid of my highly decorated bookshelves.

Anyways, one of several problems that I have encountered with the e-reader so far is that without a protective cover, it can get damaged quite easily. If you accidentally drop it, then it's likely toast. The obvious solution would be to buy a cover but they can be fairly expensive and the various color designs are plain. I decided to look around and see if there were more elaborate covers available but this proved to be in vain. So, I decided to ask around, putting  out severals requests for a custom-made e-reader cover, which of course, I would gladly pay for. When it seemed that no one would answer the challenge, I got an email from a wonderful woman who decided to take me up on my offer. I couldn't be more ecstatic. She even has a quaint little blog called Princess on a Pence so check it out. The cover should be arriving by mail soon, can't wait! Just out of curiosity, how many of you out there prefer the e-reader to actual books or vice versa? I'd like to know where you stand so please feel free to leave a comment below.

I have been really caught up with reading lately, hence the lack of reviews this week. I'm making my way through a plethora of short-stories, poetry and juggling several novels at once including 'Half of a Yellow Sun' by Chimamanda Ngozi Adichie, 'Under the Sun' by Guy Gavriel Kay and 'The Man Who Was Thursday' by G.K. Chesterton. I plan to focus more on reviews next week. In the mean time, here are a few Friday memes: 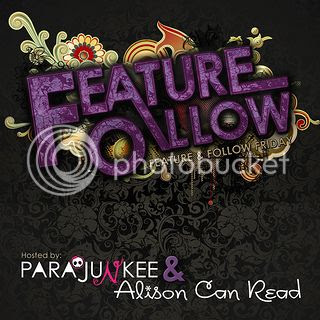 This is my first time participating in the Feature and Follow Friday held by Parajunkee and Alison Can Read. This is another great way to discover new book blogs and connect with others. There is also a question presented each week for everyone to answer:

Question of the Week: Have you ever been inspired by a book character to do something? Who was the character and what was it?

This is a tough one. There have been many authors and specific books as a whole that have inspired me in some way but fictional characters? Not so much. However, Santiago from Ernest Hemingway's The Old man and the Sea would be my answer. To me, Santiago is one of those unforgettable and inspiring characters for his sheer determination to achieve his goals, pushing himself to the limit and the unwillingness to admit defeat against so many obstacles. Perhaps it is a cliche to reinforce familiar adages such as "never give up" but sometimes cliches are useful in offering the most influential life lessons.

Thanks to Freda's Voice for hosting The Friday 56. The rules are simple: Grab a book, any book. Turn to page 56 or 56% in your eReader. Find any sentence (or few, just don't spoil it). Post it. 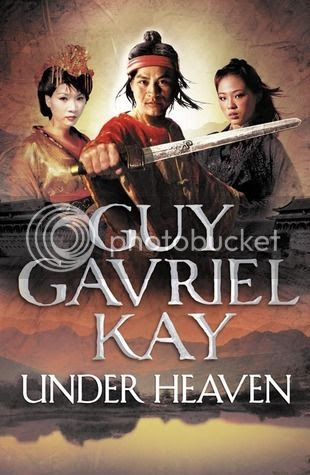 I'll be using the Kindle for the first time:

"She knows how to ride, was taught as a child because her father thought it important, even for a girl, but this much time on a horse, day after day, is hard for her, and ------- is not inclined to rest very often."

For those who follow my blog, my love for the writings of Guy Gavriel Kay has been well documented. He's one of my favorite authors and Under Heaven is one of his newer offerings, an epic historical fiction influenced by the Ancient Chinese dynasties. One of his many talents is the portrayal of well-drawn, complex, strong, independent women who don't necessarily fall into specific gender stereotypes that tends to be norm in a lot of genre fiction. As always, his impeccable writing and solid-storytelling is on display here. There is such a visceral and cinematic quality to this novel that would be perfect for a movie adaptation. I can so envision Zhang Yimou (the director of House of Flying Daggers, Hero and Raise the Red Lantern) at the helm of this project, starring Ziyi Zhang in one of the key female roles.


That's it for now, have a great weekend everyone!