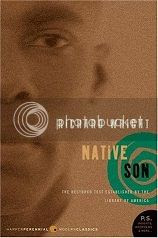 “Violence is a personal necessity for the oppressed...It is not a strategy consciously devised. It is the deep, instinctive expression of a human being denied individuality.”

A piercing sociological and psychological character study, very few novels come to mind that are as radical or uncompromising in their depiction of the black experience in America than Richard Wright's Native Son. Taking place in Chicago during the 1930's, the story is about the trials and tribulations of a young black man named Bigger Thomas who murders two women in a brutal fashion. The violence depicted in this novel is quite shocking and unsentimental, as it should be; Richard Wright is determined to produce conflicting emotions and ideas in the reader towards the protagonist's heinous crimes.  As far as the divisive issue of race is concerned, this novel has lost none of its historical, social or political relevance--it remains as important today as it did back in Wright's day when racial tensions were at their peak during the 1930's. The novel will attempt to present two different sides of the same coin: was Bigger Thomas compelled by his own free will to commit such heinous crimes or did society influence his actions? Wright spends a great portion of the novel focusing on Bigger's conflicted state of mind (reminding me a great deal of Dostoevsky's Crime and Punishment), while also showing the harmful effects of racial segregation--the struggle of suppressed individuals who feel trapped, unable to achieve any sense of self-worth, powerless in their efforts to achieve equality. After being conditioned to act subservient and feel inferior to whites for so long, what course of action is left for the black man but to strike back against his oppressors?

Richard Wright was ahead of his time. An important and influential novel, it is astonishing to me that he wrote it in 1940 before the civil rights movement even took off. He's also one hell of a writer, totally fearless. His dazzling prose is captivating, raw; possessing a relentless energy and purpose. As an irreverent iconoclast, he doesn't mince words or beat around the bush; unyielding to social norms, he intends to break down racial barriers, putting forth an honest representation of what it means to be black without any contrivances. Many detractors have dismissed this novel with vehemence, putting forth the argument that it only serves as a political platform for Wright to spew forth his left-wing propaganda. Yes, he can be preachy and heavy-handed at times but one must consider the historical, social and political context of when he was writing. His family members were ex-slaves, he lived during a time of great prejudice against blacks and racial segregation was a part of everyday life. He clearly has a lot of anger for past injustices and is strongly opposed to the degrading status of blacks living in America at the time. His writing reflects a revolutionary state of mind. He holds a vendetta against the "white man" and does blame the oppression of blacks squarely on the shoulders of a hegemonic white nation. He doesn't care much for subtlety when advocating Black Nationalism, using the brute force of a sledgehammer to drive home his radical political views. Thus, many readers are bound to find Wright's writing to be far too hostile and polemical in its motives. Approaching this novel with an open mind and maintaining a sense of cultural relativism by trying to place yourself in Richard Wright's shoes, might in fact, make it easier to understand where the author is coming from. How else is a persecuted race of people supposed to stand up to racial discrimination if they don't unite together and fight back? For Wright, violence is inevitable when individual freedoms are taken away. The destructive nature of self-hatred that arises from being oppressed by a dominant white culture, the fear and shame that comes with being black, racial blindness and how the dynamics of power is intrinsically linked to race are also of key concerns in the novel.

Bigger Thomas only views his actions within the context of race, never as an act of free-will:

"The knowledge that he had killed a white girl they loved and regarded as their symbol of beauty made him feel the equal of them, like a man who had been somehow cheated, but had now evened the score" (155).

Subservient and ruled by his dominant white superiors, Bigger is never on equal grounds because of his blackness. Going through with the murders is a liberating experience, it provides him with a sense power, a feeling of wholeness and control over his own life that he was never able to achieve before.

"Rape was not what one did to women. Rape was what one felt when one's back was against a wall and one had to strike out, whether one wanted to or not, to keep the pack from killing one. He committed rape every time he looked into a white face" (214).

Ashamed of being black, conditioned to feel inferior, treated like property, the painful reality of living day to day without any hope of bettering himself, Bigger's only escape from the bitter reality is to harness all the hate built up inside and lash out against the hostile world. Richard Wright is keen to emphasize the paradox of Bigger's life as a black man: murder is freedom.

One last quote to highlight Bigger's sense of black identity:

"It was when he read the newspapers or magazines, went to the movies, or walked along the streets with crowds, that he felt what he wanted: to merge himself with others and be a part of this world, to lose himself in it so he could find himself, to be allowed a chance to live like others, even though he was black" (226).

A sprawling novel like this is bound to have certain flaws in terms of narrative flow, weighed down by extraneous details and lengthy exposition but they are far from detrimental. Starting off slow before gradually picking up steam, the first two sections maintain a frantic pace that is emotionally exhausting until the major turning point. Unfortunately, the final act loses momentum with too many didactic monologues, psychological examinations and court proceedings. Despite these faults, they are redeemed by the novel's emotional intensity, boldness and stark realism. Native Son is well deserving of its status as an American classic. 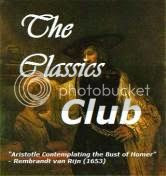 This novel is part of the Classics Club Challenge.
Posted by Jason C at 22:37