Immanuel Kant: On the Beautiful and Sublime (Critique of Judgement) 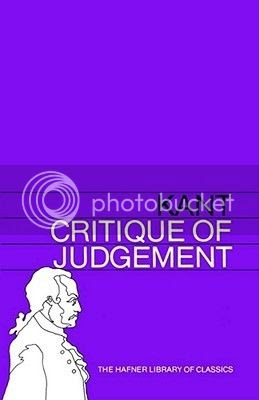 The Age of Enlightenment saw the emergence of many great philosophers, one of the dominant figures being German-born Immanuel Kant. For this month's Literary Movement, I thought it might be a good idea to take a break from fiction and read some philosophy instead. Big mistake. After weeks of struggling to get through this dense and impenetrable work, I finally gave up. Kant's Critique of Judgement is divided into two books: The Analytic of the Beautiful and the Analytic of the Sublime. His sprawling and highly complex philosophical treatise that focuses primarily on the aesthetics of human reason and teleology only served to induce frustration and violent paroxysms of rage in me. The ideas and concepts in these essays actually interest me but Kant's writing is so arduous to get through, bogged down by interminable run-on sentences, endless sub-clauses, over-technicalities and repetitiveness. After slogging through a few paragraphs (often stretching for pages), my mind would quickly wander off before a migraine set in and then I would have no choice but to stop reading or else my eyes would start to bleed. He does not properly explain himself, throws around a lot of complex terminology and seems to be under the assumption that the reader already has prior knowledge of whatever he is talking about. Perhaps others who are interested in philosophy will get more out of reading Kant but I don't have the patience for it.

Since Kant's philosophical ramblings left me in a perpetual state of confusion, I really don't have much to go on in terms of analysis or critical interpretation. However, I did manage to discern some of his basic ideas and general areas of inquiry. Whenever we label something as 'beautiful' or 'sublime' like a scene in nature or a piece of art (i.e. literature) what do we mean exactly? Is it simply a matter of subjective taste, a form of pleasure or is it more complicated involving various facets of human reason and epistemology? For Kant, beauty and the sublime are oppositional whereas both provide different types of pleasure. He writes:

"The Beautiful in nature is connected with the form of the object, which consists in having boundaries. The Sublime on the other hand, is to be found in a formless object, so far as in it or by occasion of its boundlessness is represented, and yet its totality is also present to thought. Thus the Beautiful seems to be regarded as the presentation of an indefinite concept of Understanding; the Sublime as that of a like concept of Reason. Therefore the satisfaction in the one case is bound up with the representation of quality, in the other with that of quantity."

As far as the sublime is concerned, he is keen to reject any empirical and sensationalist explanations as advocated by other philosophers like Edmund Burke. Kant distinguishes between the great and absolutely great in the sublime. He is trying to say, or at least, I think he is trying to say, that it is not the object but the mind that undergoes this new heightened sense of reason, which he refers to as the "supersensible faculty." In essence, the sublime is beyond the senses, teasing one out of thought. Thus, the feeling of the sublime is not pleasure but pain that comes with the inadequacy to grasp the object because it is beyond human comprehension in its greatness, which produces an awe-inspiring effect. In other words, there exists a repulsion and attraction at work here. He also goes on to describe various subdivisions of the sublime, one of them being the Dynamically Sublime which occurs in nature or art that has no dominion over us. Picture yourself standing at the bottom of the French Alps, staring up at the highest peak. Indeed, the view would be 'sublime' but from a Kantian perspective, it is only sublime because of the great distance between the individual and the object. In this particular scenario, nature has no dominion over the individual; they are safe amidst the natural terror. Now climbing up the mountain, that would be a different story altogether--the sublime would clearly be most apparent.

Kant views the 'Beautiful' as an intellectual concept as well: "The mind feels itself moved in the representation of the Sublime in nature; whilst in aesthetical judgements about the Beautiful it is in restful contemplation (Loc 2774)." Once again, it is not the object that is beautiful; rather, it is the state of mind undergoing a specific rationalization of the object. Art cannot claim dominion over us, thus it is attractive and beautiful. So, how does this apply to literature? Using Virginia Woolf's writing as an example, let us try to apply Kant's principles of aesthetics. It would be accurate to call her writing 'beautiful' if one were able to show how it related to the "representation of quality" in human understanding or the author's ability to use language that produces the effect of "restful contemplation." Her writing does possess an attractive quality if one favors poetic language but such an assessment is subjective and might be more suited to Edmund Burke's philosophical perspective instead. Not to sound cheeky but it might be easier to explain Woolf's stream-of-consciousness as 'sublime' since its aesthetic is metaphysical, focusing on the inner-workings of the mind that is often difficult to understand. The Waves could certainly be placed in this category.


Most of the ideas outlined here in my review are taken from Section 25 of Book 2. I have barely scratched the surface of this immense philosophical work, which according to my calculations, will probably take more than a lifetime for me to read and to fully comprehend. Sorry, but life's way too short to torture myself with Kant's tedious philosophical discourse.