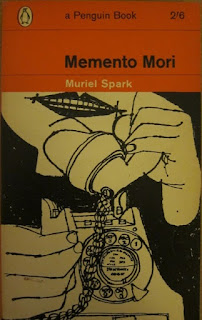 “Final perseverance is the doctrine that wins the eternal victory in small things as in great.”

When Muriel Spark is on the ball, she is an absolute pleasure to read and Memento Mori showcases the author in top form. It's hard to believe that this is the sixth novel that I have read by her and now ranks as my favorite, closely followed by The Prime of Miss Jean Brodie. Graham Greene, one of my favorite authors, was a great admirer of Mrs. Spark and had nothing but high praise to bestow upon this novel: "This funny and macabre book has delighted me as much as any novel that I have read since the war." I am inclined to agree with Mr. Greene to a certain extent; the novel certainly has dark sense of humor but I wouldn't go so far as to refer to it as "macabre." Indeed, mortality and death is the central focus (Memento Mori in Latin translates to "remember you must die," hence the title and recurring punch-line used throughout the novel) but the gloomy subject matter is never presented in a morbid fashion, nor is the tone depressing or grim. Spark always maintains a sardonic sense of humor, using playful irony with such subtle skill that even when death does rear its ugly head, the outcome is both darkly humorous and surprisingly poignant.

The premise is rather simple: a bunch of elderly Londoners begin to receive anonymous phone calls from a mysterious person who tells them "Remember you must die" before hanging up. The colorful cast of characters are all interconnected in some way; either through family relations, acquaintances or life-long relationships. The story unfolds in a similar fashion to a screwball comedy: quirky characters, fast-paced dialogue and outrageous situations that is light-hearted and entertaining. However, as in most of her novels, there is a lot more going on beneath the surface. Spark pokes fun at detective fiction by utilizing the classic "who done it?" scenario but subverts many conventions associated with the genre. A crime is committed, albeit a trivial one, and is blown way out of proportion. Instead of there being a damsel in distress, there is a dame in distress who is the most determined to discover the culprit behind the prank phone calls. Her older brother Godfrey who has a fetish for female suspenders along with his wife Charmian who used to be a famous author now suffering from dementia, are not nearly perturbed by the odd high jinks, while others find the whole charade amusing. One of the other main characters takes pride in collecting valuable data on the overall well-being of his geriatric circle of friends; obsessed with studying old age, embarking on a complex series of coded filing techniques to keep track of past relationships and personal histories as a reference just in case his memory starts to fade due to alzheimer's. See? Quirky. Furthermore, replacing the typical hard-boiled detective is a retired inspector who seems in on the joke, hired by the wealthy Dame to solve the case since the local police are reluctant to follow any leads. The Inspector is reminiscent of Edgar Allen Poe's famous C. Auguste Dupin who is always smarter than everyone in the room but once again, Spark is intent to play around with genre tropes. Instead of going into elaborate and painstaking detail of how he managed to solve the crime, Spark's detective is laid-back, nonchalant and embellishes in moral philosophy instead.

Ostensibly, the whimsical story is an innocuous fable. However, Spark delivers an astringent satire on senior citizens and gerontology. In the wrong hands, this novel could easily have turned out to be one of those awful Saturday Night Live skits that tries too hard to be edgy and funny but is only embarrassing. Muriel Spark's saving grace is her brevity, sharp wit and talent for writing such great dialogue. The snippy back-and-forth banter between characters is positively droll. One of my main complaints about Spark's writing is that sometimes the characters are often one-dimensional, merely serving as props for jokes and running gags. However, with this novel, she finally manages to create an effective balance between the absurd and sentimentality. Even with her detached authorial voice that she uses frequently in her writing, Spark grants just enough depth to these characters to take them seriously even when they seem to be operating within the realm of the bizarre. Familiar Spark-isms crop up again: conniving characters, infidelity, black-mail, murder, upper-class snobbery and Catholicism but it is handled with such inventiveness that it does not come across as redundant for those who have encountered the author's work before.

The afterlife obviously tends to be at the forefront of a lot of these character's minds because they are getting on in years, afflicted with health problems or living in retirement homes.  While most people would rather not think about their inevitable fate, these phone calls don't exactly help to calm the nerves of these poor individuals who are already well aware that Death is on the doorstep. Are the phone calls actually real or just early signs of senility often accompanied by old age? Is it a hoax played on the reader as well or perhaps a grand metaphor of some kind? I will not spoil the ending but in typical Spark fashion, she plays with the reader's expectations in such a clever way that brought a smile to my face. Dame Muriel Spark continues to surprise and delight. 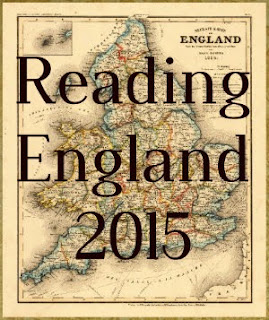